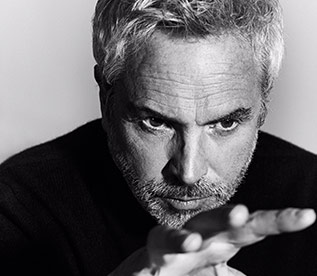 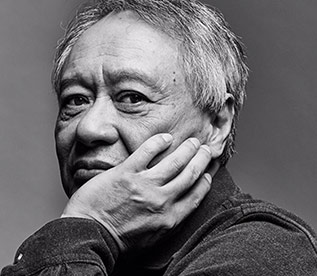 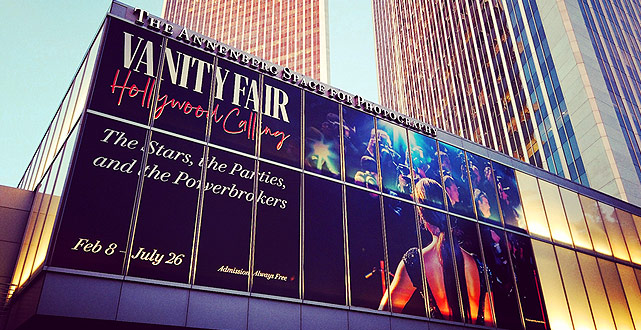 The stars, the parties, the powerbrokers, they are all at the Annenberg Space for Photography seen through the distinctive lens of the most widely celebrated journalistic arbiter of Hollywood power and personality, Vanity Fair. The exhibition at the Annenberg Space for Photography, Vanity Fair: Hollywood Calling features photographic portraiture and multimedia installations that capture the magic and glamour of the film and television industry’s major players from the last four decades. With 130 photographs and more than 50 photographers, Hollywood Calling showcases Vanity Fair’s vaunted portraitists, including the magazine’s principal photographer, Annie Leibovitz, as well as Jonathan Becker, Harry Benson, Cass Bird, Cristina de Middel, Ethan James Green, Erik Madigan Heck, Horst P. Horst, George Hurrell, Helmut Newton, Herb Ritts, Collier Schorr, Firooz Zahedi, and dozens more. “The extraordinary artists in this exhibit have done so much more than chronicle celebrities; they’ve helped define our popular culture, as Vanity Fair itself has done,” said Wallis Annenberg, President, CEO, and Chairman of the Board of the Annenberg Foundation. “Their photographs have inspired magazine readers and defined the careers of Hollywood ’s most successful actors. This exhibit shows why the allure of Hollywood is impossible to ignore.”

Always ground breaking, the iconic 1991 Vanity Fair cover that featured the Annie Leibovitz photo of Demi Moore posing nude while seven months pregnant was highly controversial with some stores banning the sale of the issue. The photo was originally intended only for Moore and her then husband, Bruce Willis, but Leibovitz and then V.F. editor Tina Brown convinced Moore that it deserved to be a cover. “I think we did something great for women with that cover. It’s one of my proudest things that we did for women, because it really liberated women from maternity clothes. And it also liberated women from a sense that pregnancy was something to be sort of covered up,” Brown said. “Now it’s become normal for pregnant celebrities to want to be photographed naked. Stars who are pregnant since, all want to do that Demi Moore shot.” The show will also display every Vanity Fair Hollywood Issue cover and portfolio, as well as photos from the annual Vanity Fair party on Oscar night.

The Wallis Annenberg Center for the Performing Arts in Beverly Hills is giving theater goers a taste of Vanity Fair – Hollywood Calling with a display of photos from the exhibit including some from this year’s Academy Awards party.

The Annenberg Space for Photography is a Los Angeles treasure, a cultural destination dedicated to exhibiting both digital and print photography in a stunning self-contained building with a wonderfully intimate environment. The venue, an initiative of the Annenberg Foundation and its trustees, is the first solely photographic cultural destination in the Los Angeles area and is a must see for anyone interested not just photography, but in the culture of other lands, nature, stories of people all told with magnificent photographic images.